Dark matter may reveal itself in the periodic radio signal emitted by pulsars in binary systems, a new research says. During their motion around the galactic center, a pulsar and its companion would experience a wind of dark-matter particles that produces a characteristic seasonal modulation of the orbit, an effect that can be detected with radio telescopes.

Dark matter is one of the biggest mysteries of our Universe. It is five times as abundant as ordinary matter and spreads all throughout the cosmos but -because it doesn't emit nor absorb light- it is extremely challenging to detect. Nonetheless, dark matter gravitates just like any other body and its gravitational influence can affect the motion of planets and stars near the galactic center, where dark matter accumulates.

The magnitude of this effect is typically tiny and its detection would require extremely precise measurements of the orbits of stars. Fortunately, in the last decades astronomers discovered several radio pulsars, which are ideal for such precise measurements. Pulsars are neutron stars which -just like lighthouses- emit a beam of electromagnetic radiation with an astonishingly regular period. This regularity is comparable to that of the best atomic clocks on Earth and can be used for precise measurements, for example to detect indirectly the emission of gravitational waves, the existence of extrasolar planets, and to study possible deviations from Einstein's theory of General Relativity.

A new article published in Physical Review D by CENTRA member Paolo Pani shows that the dark matter breeze felt by a pulsar in a binary system causes a secular change of the orbital period whose magnitude can be well within the astonishing precision of pulsar observations. This new effect can be used to detect new particles in the halo of our galaxy and to understand how dark matter accumulates near the supermassive black hole lurking at the galactic center. These results were recently covered by the NewScientist. 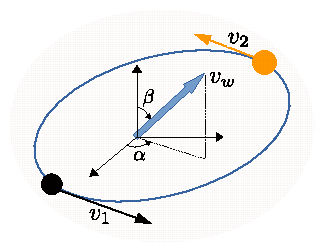