Successful commissioning of GRAVITY at the VLTI 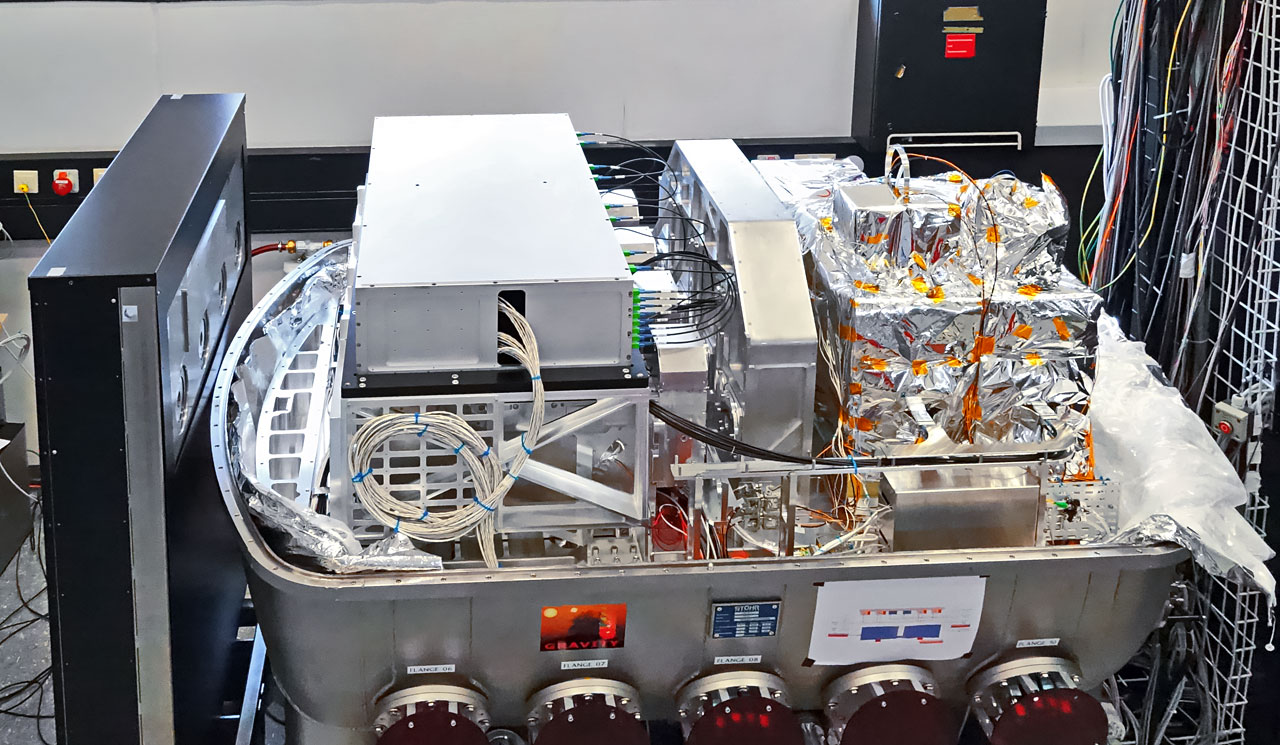 Zooming in on black holes is the main mission for the newly installed instrument GRAVITY at ESO’s Very Large Telescope in Chile. During its first observations, GRAVITY successfully combined starlight using all four Auxiliary Telescopes. The large team of European astronomers and engineers, led by the Max Planck Institute for Extraterrestrial Physics in Garching, and are thrilled with the performance. CENTRA’s team participated in the building of an important part of the instrument, and was also involved in the commissioning and testing of the instrument in Paranal. During these initial tests, the instrument has already achieved a number of notable firsts. This is the most powerful VLT Interferometer instrument yet installed.

The GRAVITY instrument combines the light from multiple telescopes to form a virtual telescope up to 200 metres across, using a technique called interferometry. This enables the astronomers to detect much finer detail in astronomical objects than is possible with a single telescope. CENTRA’s team contribution was to build the instrument acquisition camera. This system corrects tracks the scientific target on the sky and obtains critical optical information from light beams, allowing the instrument to achieve its exceptional precision in the position of an astronomical object [3].

Since the summer of 2015, an international team of astronomers and engineers led by Frank Eisenhauer (MPE, Garching, Germany) has been installing the instrument in specially adapted tunnels under the Very Large Telescope at ESO’s Paranal Observatory in northern Chile [1]. This is the first stage of commissioning GRAVITY within the Very Large Telescope Interferometer (VLTI). A crucial milestone has now been reached: for the first time, the instrument successfully combined starlight from the four VLT Auxiliary Telescopes [2].

Check the full press release at the ESO site.

The GRAVITY consortium is led by the Max Planck Institute for Extraterrestrial Physics, in Garching, Germany. The other partner institutes are:

[1] The VLTI tunnels and beam-combining room have recently undergone significant construction work to accommodate GRAVITY as well as to prepare for other future instruments.

[2] It would be more accurate to call this step “first fringes” as the milestone was the first successful combination of light from the different telescopes so that the beams interfered and fringes were formed and recorded.

[3] GRAVITY aims to measure the positions of objects on scales of order ten microarcseconds, and perform imaging with four milliarcsecond resolution.